So Thankful For So Much 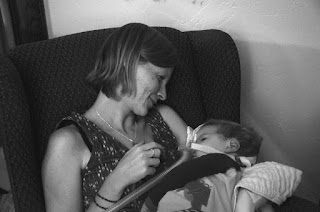 I have taken quite a break from writing updates, posting to the archives, or even really thinking about this blog. This is because we have been making the most of the sunshine and recently departed autumn weather!  Today, with the temperatures in the 40s and the sun heading down over the mountains around 4:30, I spent most of this afternoon organizing digital photos and working on our Christmas card.  Going over all the photos from the past two years made me almost boil over with gratitude (and please forgive the very photo-ful blog post- I have yet to master formatting on this site...).  I can not believe how far Isaac has come, and I have great hope that he will be with us for a good long while.  Natalie is fighting off yet another cold, and Isaac seemed content to watch football, nap, and play with Jeremiah (who was content to watch football, nap, and play with Isaac).  Last weekend, some friends asked me about our minivan, and gave me a well-deserved hard time for not updating everyone.  I seriously thought I had already done that, so... my bad! And thank you Ellen and Liz for the gentle nudge.

So here goes, I'm going to try to make this quick so I can get to bed, but brevity is not my strength.

-Our van is fixed!  We actually got it repaired and returned to us while Isaac was in the hospital in September.  My parents' neighbor here in Colorado can do pretty much anything car related, and he made the van look and function better than it had before the accident.

-Jeremiah is still recovering, though he is back to being able to help with treatments, drive, and generally be around.  He saw a neuropsychologist who wants to do some further testing in order to devise a treatment plan specific to the mild cognitive deficits that are a result of his concussion. Fun!

-Starting a few weeks before his last hospitalization, Isaac had several rough nights.  When he got sick, I attributed those nights to the fact that he was coming down with something.  He slept really well in the hospital, but after coming home it was back to the rough nights.  We thought perhaps he had just grown enough to be uncomfortable on his mattress.  So we switched out the small portable crib -that had barely enough room for his toes- for Natalie's old crib.  I found a toddler appropriate foam overlay to help reduce pressure sores, and happily bought some new Isaac appropriate crib sheets.  I honestly had thought I would never need to move him to the bigger crib, so it was a sweet moment.  With the room rearranged, Jeremiah built a shelf for Isaac's stuffed animals, knick-knacks, and night light (it's like a mini-nursery for him in our room, and he loves to watch his night light as he falls asleep, and coo at his animal friends when he wakes up). He spent over a week needing Tylenol and ibuprofen every 4 hours because he was teething, he had a reaction to the orajel, so we thought this could be contributing to his difficulty sleeping. But then a tooth popped through! So Isaac was healthy, he had a new crib, a better mattress, a tooth, but he still wasn't sleeping.  Ergo, I was not sleeping.  I think it was about 3 months of the poor kid crying in his sleep every 45-60 minutes.  So that meant every 45-60 minutes, I would get out of bed, roll him over, and gently pat him until he fell back asleep.  Some nights he would sleep for a 2-3 hour chunk, and he almost always slept well from 6-8 in the morning.  I was exhausted.  At Isaac's last check up with the muscle team at Children's, we talked with every member of his team, trying to figure out what it could be.  Let's try a new type of mattress, let's try an anti-anxiety, could it be reflux?  Lo and behold, after much deliberation, reflection, and a few more days of trial and error, we determined that Isaac's discomfort overnight was due to all of the extra fluids (water and pedialyte) we have been giving him during the day.  We started adding the extra fluids to his overnight feed, increased the rate at which he is fed just a little, and voila, we have a sleeping child.  And so, for the past week and a half, Isaac and I have both gotten some restful sleep.  Thank God.


-Natalie loves pre-school more than anything, I think.  She talks about her teachers and her friends, she sings all of the songs for us when she comes home, and she is doing so well.  They had a little Thanksgiving program last week, so Jeremiah went and took a video for me.  I'm hoping we can all go to her Christmas program, if the little historical church where it's being held is accessible for Isaac.  Her teachers and her classmates' parents are amazing and generous people, and I am grateful that we chose Country Kids as her preschool!

-My parents have returned to Illinois for the winter. I think they got home in time for a few days of nice fall weather.  We miss them, but they will be back for a few days in December!

-Isaac is outgrowing his stroller, so the wheelchair rep is coming to our house in December to measure him for the next size. She also wants to measure our house, because it is fairly small, and the next size stroller is fairly big (think long, he lays flat and he is getting tall!).  We need to gear up for some more home renovations, because with the longer stroller, we won't be able to get Isaac into our bathroom.  We will likely move the door as originally planned, which will make me want to finally redo the kitchen.  But Isaac also needs a new crib for our living room, where we do his breathing treatments and he takes naps.  IKEA, here we come!  As soon as it isn't Thanksgiving week or snowing!
-I am having an umbilical hernia repair done this week, and while the surgery itself isn't a big deal, I'm not really looking forward to the recovery.  It also means I will be gone for one of Isaac's breathing treatments, and that just makes me nervous.  I am sure he will do just fine, because he has been such a big boy these last few days!  He has kept his heart rate and oxygen up during the treatments, instead of getting scared and bearing down and holding his breath when I suction his nose.  He has even fallen asleep the past 4 or 5 nights by himself, without me or Jeremiah rocking and patting his hip and back.  I'm so proud of him!


-Isaac really is doing well.  We can hardly believe how big he is getting, how smart and sweet he is. His personality just shines through his eyes, his smile, his laughter (and his glares and cries and whines of impatience).  He still loves playing with Natalie, race cars, dinosaurs, and blocks.  He LOVES watching cartoons, and he has days when he isn't feeling great that all he will do without a scowl on his face is watch television.  But he also loves being read to, The Gruffalo, The Bunny Rabbit Show (and anything else by those authors) are his favorite.  About a week ago, Jeremiah had a stack of books out to read to Isaac, and he picked up the top book to read. Isaac started crying because he saw that Bunny Rabbit Show was the next book in the stack.  Jeremiah finally abandoned the first book because Isaac clearly had interest in NOTHING other than the dancing rabbit book.  He uses his eyegaze device frequently, though not as often as I would have it in an ideal world  (I mean, ideally, he wouldn't need a communication device), but he still uses it well and with intention.  He uses his eyes to play memory games, matching games, car racing, the piano, the drums, and to tell us what toy he wants, which book, which person, and what he wants to do.  And since he still has use of his fingers, he can still play with his switch toys also!  I'm on the lookout for a switch-adaptable train set for Christmas.  I might actually take his switch to Toys R Us and start opening boxes to try it out on different sets (after, of course, explaining to the manager and hopefully getting the okay:).

-Some amazing people are doing very generous things for us! Thank you ALL!
1. Debi Bancroft sells Simply Said home décor, and she is hosting an online fundraiser!  You can go to the Facebook page, Roar with Isaac Fundraiser, or find the site at Simply Said designs.
2. Our church's chapter of the Knights of Columbus will be taking donations at the Mead tree lighting on December 5th and the Guardian Angels tree lighting on December 6th.
3.  Black Canyon Distillery is hosting another fundraiser for Isaac!  They are having a bake sale and cake walk on December 5th, from 11-8, at their distillery (13710 Deere Ct, Longmont).

So, I kept it brief-ish.  I want to thank everyone for your continued prayers, support, love, encouragement.  And I want to ask you for your prayers as we continue into cold/flu season.  We become more and more isolated when viruses are on the rampage, and the short, colder days keep us inside. Please pray that none of us go crazy being inside for the winter, but instead come to enjoy and appreciate the hibernation.  Much love to you all, and Happy Thanksgiving!  Life is a gift, be grateful!