It's February! You know what that means?

Isaac's second birthday is almost here!  That's right, in just 11 days our sweet, bright, funny, handsome little dude will be two years old!  When Isaac was first diagnosed, we only dreamed this day would come.  We gratefully celebrated his first birthday, then cautiously settled back into daily life.  We had some scares over the summer, but by Thanksgiving we felt confident that we could hope for a celebration of Isaac's second birthday.  Hope is such a strange feeling for us and for those who know and love Isaac.  We have every reason to hope and believe that he will live to see his birthday.  We don't have pits in our stomachs constantly aching with that sharp, consuming fear.  But every single day we live with the reality that Isaac is strong but fragile.  Isaac is a fighter, but if we didn't react in time with just what he needed to keep on breathing...It is a reality, but one we try to push aside and ignore in favor of the amazing and beautiful moments of every day. I think of Emily Dickinson, "Hope is the thing with feathers that perches in the soul-and sings the tune without the words- and never stops at all." Hope never stops, yet I feel it both perching and preparing for flight.


Our son is an incredibly smart kid.  I wish everyone could see him use his talker, control his switch toys, and manipulate his mommy and daddy for more cartoons.  Isaac has learned exactly how he needs to communicate with us if he needs something.  Jeremiah and I know his different sounds, how he tells us he needs to be suctioned, that he's had enough, that he wants a turn playing, that he needs to be moved or have his diaper changed, or a dry cloth under his head, which book he wants to read, and when we have misinterpreted what he said.  He likes to be silly, in his own way.  Last night, Jeremiah and Natalie were off at a Daddy and Daughter Dance.  Isaac and I were playing a game where he holds onto a small ball and drops it on the count of three. When I would ask him if he wanted another turn, he would say his version of "yeah." He would open his fingers for me, and as soon as the ball got close to his hand, he would clench his fist to keep me from giving the ball to him.  I would laugh, he would giggle, and eventually he would open his fingers to take another turn.

Isaac playing ball, but not teasing me!


The past month has flown by, as I'm sure is true for everyone. I had intended to write a post just after Christmas, but then suddenly it was January, and now February.  We managed to stay busy despite being snowed in for all but two days in January.  By snowed in, I mean that the snow we got before Christmas is still on the ground, now taking the forms of snow, ice, and mud covering half of the surfaces in our neighborhood.  Those conditions are ideal for Natalie, who will happily tromp through all of it (and has two mud-caked pairs of boots to prove it), but not so great for Isaac, whose stroller is designed for dry sidewalk... 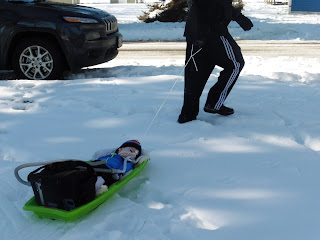 The day of the snowstorm, I stopped by Wal-Mart on my way to work.  I had to pick up a sled!  I was not the only person with the same idea, but I managed to grab one of the last three.  Jeremiah and Isaac did some laps around the front yard.  He was skeptical, but hey, it was a new experience!  Later, in January, Natalie and I went sledding on the hill here in Mead.  We broke the sled, but it had a good run.  Or seven, to be exact. 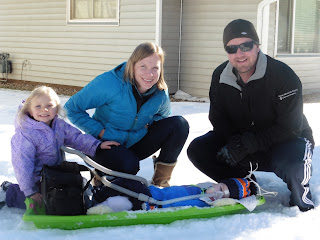 We have managed to get to almost every Song and Story time over at the parish hall.  Isaac loves it. I have a picture of him below (with one of his nurses behind and a friend in front), shaking the eggs during a song. 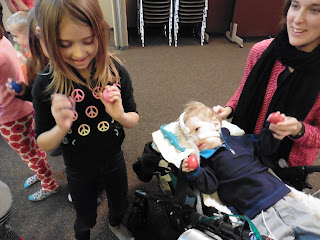 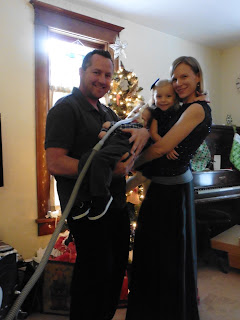 We had a lovely Christmas, and it already seems so long ago! The four of us went to Christmas Eve Mass at our local parish.  We always try to sit in the front pew at Mass, because Isaac can sit in front of us and watch the proceedings (and squeal with delight at the sight of Father Alan, the Eucharist, the lector, the altar servers, etc.).  We arrived 45 minutes early, but we still weren't there soon enough to nab the front pew.  Thankfully, the family in front graciously gave us their spot, so Isaac was able to see the goings on and watch all of the kids who sat around the altar for the service. Jeremiah helped him place an angel ornament on the tree (a tradition at our church). We sang Silent Night, and I choked up and cried.  I have always had a hard time singing that song on Christmas without getting teary eyed, but this year I full on cried.  I was just so happy to be standing there at my husband's side, looking up at the altar with the manger scene, surrounded by children- including both of our children. One or two older boys gave me concerned glances, and tried to look tactfully away.  So. Sweet. 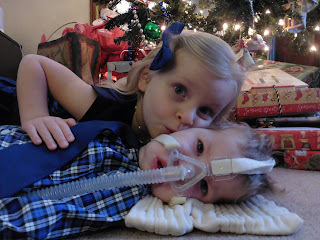 After Mass, we came home and had dinner together. Natalie left cookies out for Santa (along with an impressively recognizable drawing of a Christmas tree), and the kids went to bed. 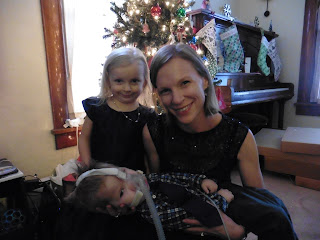 In the morning, Natalie woke up and opened her stocking.  Isaac slept in a full hour and a half later than usual, and Natalie played patiently while she waited for him to get up. Once he was up and ready, we opened presents.  My uncle Neal and Jeremiah's mother, Sharon, joined us, and I loved having some extended family for the day!  We had lunch, talked, and tried to convince Isaac to take a nap (he did not).  It is difficult to describe the joy of celebrating another Christmas with both Natalie and Isaac.  My heart was full, as it is every day, but with the added graces and blessings of our Savior's birth.

I have so much more to say, but I will leave it for another (coming soon!) post.  I hope that you all ring in this next month with prayer, kindness, and acts of true love.  Be patient with one another, be gentle, and be not afraid to speak what's in your heart.  There will always be hope, whether you feel it perching or taking wing, because there is always Jesus Christ, our God who knows you and loves you still.

From today's Mass readings:
"Before I formed you in the womb, I knew you. Before you were born, I dedicated you..."  Jeremiah 1:4-5

"I will sing of your salvation.
For you are my hope, O Lord,
my trust, O God, from my youth.
On you I depend from my birth;
from my mother's womb you are my strength."  Psalm 71

"Brothers and sisters:
Strive eagerly for the greatest spiritual gifts.But I shall show you a still more excellent way.If I speak in human and angelic tongues,but do not have love,I am a resounding gong or a clashing cymbal.And if I have the gift of prophecy,and comprehend all mysteries and all knowledge;if I have all faith so as to move mountains,but do not have love, I am nothing.If I give away everything I own,and if I hand my body over so that I may boast,but do not have love, I gain nothing.Love is patient, love is kind.It is not jealous, it is not pompous,It is not inflated, it is not rude,it does not seek its own interests,it is not quick-tempered, it does not brood over injury,it does not rejoice over wrongdoingbut rejoices with the truth.It bears all things, believes all things,hopes all things, endures all things.Love never fails.If there are prophecies, they will be brought to nothing;if tongues, they will cease;if knowledge, it will be brought to nothing.For we know partially and we prophesy partially,but when the perfect comes, the partial will pass away.When I was a child, I used to talk as a child,think as a child, reason as a child;when I became a man, I put aside childish things.At present we see indistinctly, as in a mirror,but then face to face.At present I know partially;then I shall know fully, as I am fully known.So faith, hope, love remain, these three;but the greatest of these is love."     1Corinthians 12:31-13:13